The history of AIANY reflects that of New York City and all the ferment, folly, frustration, fun, and high hopes of this complex urban center. The timeline below also gathers the contributions of individual members, both locally and internationally, who represent the broadest cross-section of interests, backgrounds, and talents appropriate to the founding chapter of the American Institute of Architects (AIA). AIANY endeavors to be at the forefront of sustainability, practice, planning, technology, and equity—the things that really interest and affect our members and our global city.

1857: On February 23, 1857, 13 architects meet in Richard Upjohn’s office in Manhattan, forming what would become the American Institute of Architects (AIA) to “promote the scientific and practical perfection of its members” and “elevate the standing of the profession.” Until this point, anyone who wished to call themselves an architect, including masons, carpenters, bricklayers, and other members of the building trade, could do so. 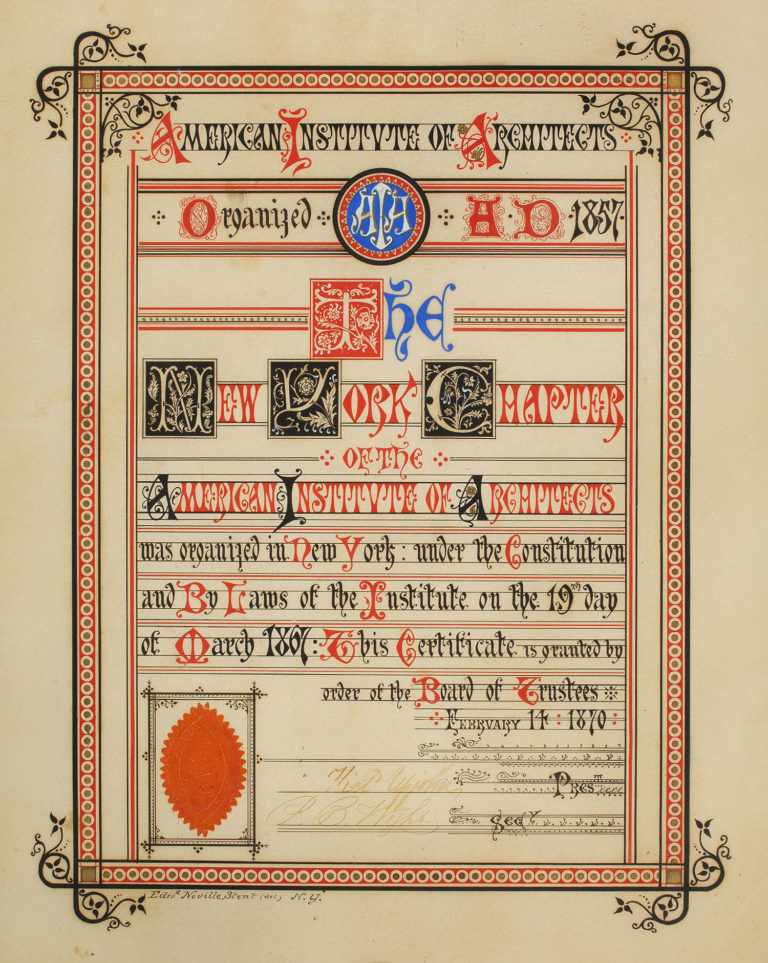 1867: By the mid-1860s, architects from other cities seek to join the AIA. Members decide that, from here on out, chapters would be formed in cities across America and make their original group the first official local chapter. The newly minted New York Chapter of the American Institute of Architects (AIANY) holds its first meeting on March 19 and hosts the first AIA Convention later in 1867.

1910: The LeBrun Grant is established to further the personal and professional development of an early- or mid-career architect through travel.

1910: The Apartment House Medals and Certificates of Honorable Mention are established, marking the beginning of the Chapter’s Design Awards programs.

1916: The 1916 Zoning Resolution, the first citywide zoning code in the United States, is enacted. AIANY played a key role in developing the plan.

1917: AIANY introduces the Medal of Honor, one of the highest honors for distinction in the profession.

1938: AIANY introduces Oculus, the Chapter’s official newsletter. The publication is named after the circular opening at top of a dome (as in the Pantheon in Rome), symbolizing “the function of this leaflet in shedding light on the activities of the Chapter.” 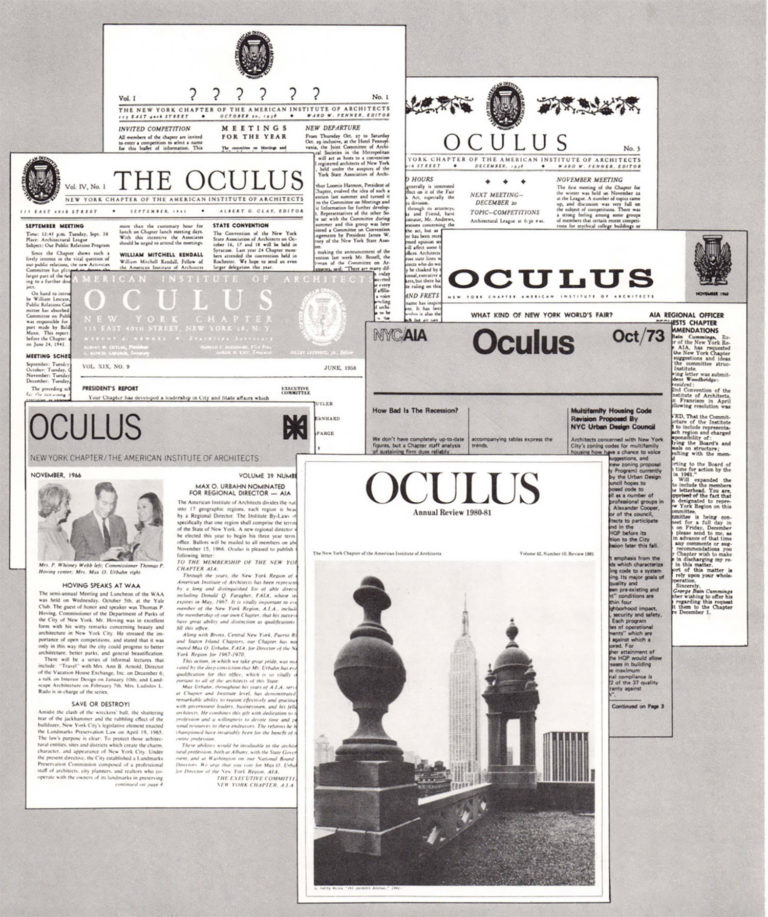 Oculus was introduced in 1938 as the Chapter's first official newsletter, later a quarterly magazine.

1939: World’s Fair opens in New York, planned and designed by AIANY members. The chapter acts as host to visiting architects and organizes Architects’ Day, a series of tours, lectures, and events to stimulate dialogue among international architects and designers.

1940: The Arnold W. Brunner Grant is established, funding advanced study to mid-career professionals in any area of architectural investigation that contributes to the knowledge, teaching, or practice of architecture.

1947: New York City is selected as the site of the United Nations. AIANY’s Civic Design Committee members play a key role in the headquarters development, led by Wallace Harrison.

1948: Over 30,000 people attend the Chapter’s exhibition, Tomorrow’s World, at the New York Museum of Science & Industry, AIANY’s most ambitious undertaking to date. A plaque placed on 111 Broadway in Lower Manhattan in 1957 commemorates the centennial founding of the AIA.

1958: Chapter advocates alongside Jane Jacobs and other activists to preserve Washington Square Park and the surrounding area from the Lower Manhattan Expressway. AIANY and allied partners form a Special Committee on Neighborhood Conservation Program for New York City.

1961: The Chapter advises on new zoning resolution, the first comprehensive zoning since 1916. AIANY had been involved with the process since 1948.

1963: AIANY works hard but fails to secure the preservation of Penn Station. The Chapter becomes a leading voice in the establishment of the Landmarks Preservation Commission.

1963: Equal Opportunities Committee is formally established to administer scholarship fund for minority students across the city.

1967: The highly popular AIA Guide to New York City is released. The Chapter would continue to assist in the publication of this landmark guide until 2010.

1967: New York Foundation for Architecture is formally incorporated “for charitable, educational, literary, scientific, and philanthropic purposes, including the advancement of the profession of architecture and architectural research service and art” and quickly becomes the largest foundation of any AIA Chapter. Soon after, the Foundation launches its first major K-12 initiative, hosting children in architecture offices across the city, much like our current Discover Architecture program.

1973: The Chapter exhibition The Architect and the Energy Crisis: Architecture as an Energy User opens. The show, praised by Ada Louise Huxtable as “groundbreaking,” travels to the AIA Convention in San Francisco and around the country.

1977: AIANY partners with City Planning Department to design New York’s first playground for children of all abilities, signaling the Chapter’s involvement in accessibility advocacy well ahead of the ADA passage in 1990.

1980: The Chapter moves into the historic Villard Houses, establishing the Urban Center in partnership with the Municipal Arts Society, the Architectural League, and the Parks Council. The 1980 opening reception for the new Chapter headquarters at the Urban Center, at the historic Villard Houses.

1982: The AIANY Design Awards are established, recognizing work in all typologies.

1984: The Douglas Haskell Award for Student Journals is established, recognizing writing and journalism by students in architecture schools.

1985: The Chapter receives its first major grant from the NEA to promote the effectiveness of architects in public service. 1988: The Chapter hosts the first show of Russian Constructivist drawings permitted outside the USSR.

1988: The Chapter hosts the AIA Convention.

The Chapter hosts the AIA Convention in 1988.

1990: AIANY partners with Women In Need to explore how architects can develop supportive residential environments for people experiencing homelessness.

2001: AIANY and allied organizations launch New York New Visions, a group that advises government agencies on urban design and planning guidelines for the redevelopment of Lower Manhattan after the destruction of the World Trade Center.

2006: AIANY partners with the NYC Department of Health and Mental Hygiene to launch FitCity, a conference exploring how the built environment can create opportunities to increase physical activity and improve health equity across neighborhoods. The initiative, which also inspired a traveling exhibition in 2013, is held annually until 2019.

2009: In response to the Great Recession, AIANY launches Not Business as Usual, a member-driven initiative that helps thousands of architects, designers, and allied professionals.

2012: In response to Superstorm Sandy, AIANY and the AIANY Design for Risk and Reconstruction Committee spearhead a collaborative initiative to investigate issues and outline opportunities to address the short-, intermediate-, and long-term impacts of climate change on New York City, culminating in the “Post-Sandy Initiative” report.

2016: AIANY partners with NYC Department for the Aging to develop Aging in Place Guidelines for Building Owners, offering recommendations to protect the safety of older tenants.

2017: AIANY launches the Civic Leadership Program, an annual, six-month program during which 10 emerging professionals gain skills in community engagement and advocacy to better represent the communities they serve.

2018: With support from the Rockefeller Foundation, the Center for Architecture and AIANY develop the Zero Waste Design Guidelines in conjunction with over 100 collaborators, helping the city to achieve its goal to send zero waste to landfill by 2030. AIANY hosted the AIA Conference on Architecture in 2018, taking place at the Javits Center. Photo: Courtesy of Pentagram.

2018: AIANY hosts the AIA Conference on Architecture, organizing hundreds of architect-led tours and launching its annual Day of Service program. At the conference, former chapter president Frances Halsband, FAIA, with the support of AIANY, introduces a resolution to amend the AIA’s Code of Ethics to address issues of sexual harassment and equity.

2020: AIANY and AIANYS form the AIANY-NYS Unified Crisis Taskforce to aid in the response to the COVID-19 pandemic. The task force becomes instrumental to the development of the Design Corps, a volunteer network launched by AIANY, NYCxDESIGN and the NYC Economic Development Corporation that assists restaurants in adapting to pandemic guidelines.

2020: The AIANY Board of Directors issues the “Criminal Justice Facilities Statement,” encouraging members to consider redirecting their efforts toward restorative justice or pursue areas of design that serve to uplift users and communities in response to the racialized abuses of the American criminal justice system.