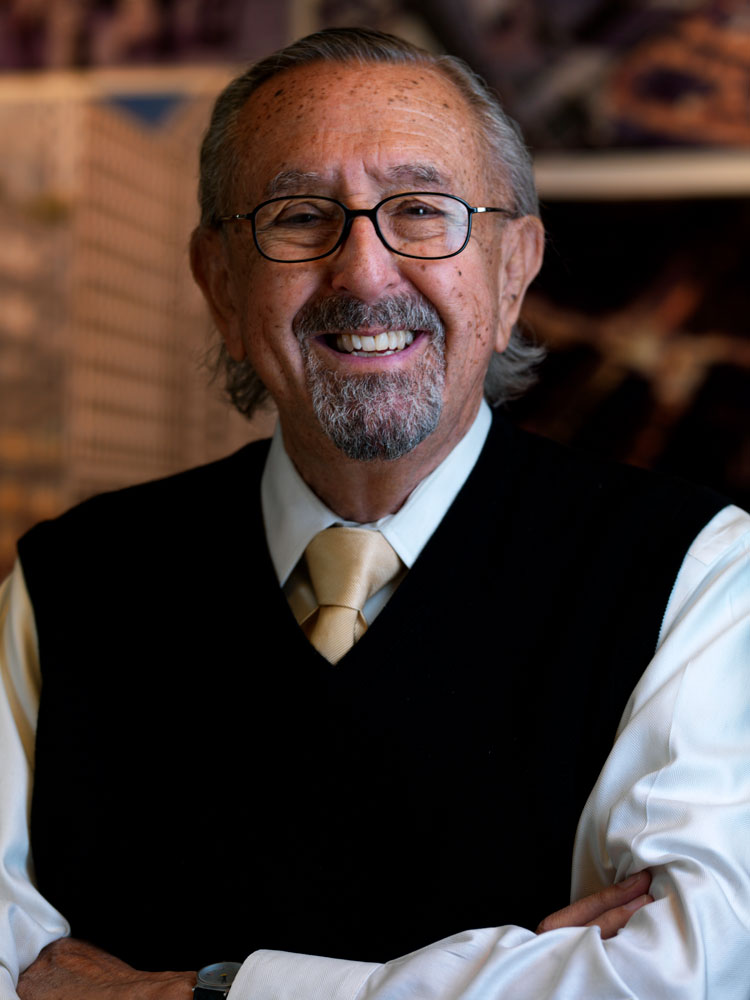 On July 19, the world lost another iconic architect when César Pelli, FAIA, died at his home in New Haven at the age of 92. Pelli was the mastermind behind such iconic buildings as the Petronas Twin Towers in Kuala Lumpur, which stole the world’s tallest building title from SOM’s Sears Tower when it was completed in 1998, and San Francisco’s tallest building, the 1,070-foot Salesforce Tower.

In 1995, the American Institute of Architects awarded Pelli the Gold Medal in recognition of a lifetime of distinguished achievement in architecture. He was awarded the Aga Khan Award for Architecture in 2004, followed by AIA New York’s own President’s Award in 2012. “For nearly five decades, Cesar has applied his humanistic values at a range of scales from the dizzying heights of the Petronas Towers in Kuala Lumpur to a small chapel in New Haven,” said 2012 AIANY President Joseph Aliotta, FAIA.

“I want to send my condolences to the family and friends of the talented César Pelli,” Argentine President Mauricio Macri wrote on Twitter. “The works he leaves around the world as a legacy are a pride for Argentines.”

Pelli was born in 1926 in Argentina, where he earned a diploma in architecture from the Universidad Nacional de Tucumán in Argentina’s Tucumán province, where he grew up. He came to the U.S. in 1952 to continue his architecture training at the University of Illinois at Urbana-Champaign. He went on to work in the office of Eero Saarinen for nearly 10 years, contributing to several notable buildings including the TWA Terminal at JFK Airport in New York, which recently re-opened as the TWA Hotel. In 1975, while he worked for Los Angeles-based Gruen Associates, he began one of his most notable projects: a trio of massive buildings for the city’s Pacific Design Center, covered boldly in blue, green, and red glass, that took nearly 40 years to complete. In these early years, he also designed several other award-winning projects, including the San Bernardino City Hall in San Bernardino, California; and the United States Embassy in Tokyo, Japan.

In 1977, Pelli became Dean of the Yale University School of Architecture, a post he held until 1984, and also founded Cesar Pelli & Associates in New Haven, Connecticut, at the age of 50. In 2005, the firm was renamed Pelli Clarke Pelli Architects in recognition of the increased role of the firm’s other principals, Fred W. Clarke, FAIA, and Pelli’s son Rafael Pelli, FAIA.

Here in New York, the firm’s renovation of and expansion to the Museum of Modern Art, the World Financial Center (now known as Brookfield Place), the Bloomberg Tower, and the Theodore Roosevelt Courthouse are projects that have transformed the city’s skyline and the architecture community. Pelli’s work as an architect and educator has set a standard for design leadership. His career serves as a model for us all.

Pelli’s death makes him the third larger-than-life architect we have lost in the past few months, following the passing of Kevin Roche, who died at 96, and I.M. Pei, who died at 102. As Paul Goldberger wrote wrote on Twitter, “It does say a lot for architects’ longevity.”

Pelli Clarke Pelli has shared a tribute to Pelli on the firm’s web site.